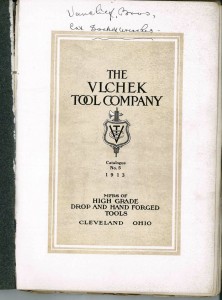 The Whittemore Company began in Chicago, IL in 1918 as what was referred to as a sales agency. The company represented complementary manufacturers in a specific geographical area and served as their regional sales and application office.

Aubrey Luther Whittemore, born in Chicago in 1890, was the founder. He worked in industry and had six children, four boys, and two girls. Of the six, only two, Charles Phillips (Phil) and Stanley Lawrence (Stan) decided to join their father in the business. The three worked together. Phil and Stan were only two years apart in age being born in 1916 and 1918 respectively. The family lived in Evanston, IL during that time. The family’s other sons went on to become a doctor, and an airline pilot as the Whittemores were quite strong academically.

The business was originally named A. L. Whittemore Company and was located on the near west side of Chicago (@ 15 N. Jefferson St.) which, at the time, was mostly offices and small businesses. The convenience to the downtown train station (Union Station) was a major advantage. In fact, one of the old agreements with an early principal defined The Whittemore Co. territory by the cities served by a major railroad. Stan Whittemore (2nd generation co-owner) told stories that a typical road trip would involve catching the overnight train to Minneapolis and then spent several days calling on customers by public transportation and taxi cab. Even getting to Milwaukee was a train ride because of the poor roads and how few cars there were at that time.

In July of 1957, Aubrey drowned in a swimming pool accident in Ontario Canada while on vacation. There was speculation at the time that he may have experienced a heart attack while swimming which may have been the actual cause of death. At the time, the company was already incorporated, so Phil was elected President and Stan, Vice President.

They moved the office from downtown Chicago to a location near Cicero and Peterson on the north side of Chicago (@ 5901 North Cicero Ave.). Business, at that time, was moving out to the suburbs, and they both lived in the northern suburb of Wilmette. The product lines represented were always focused on machine tool accessories and other metal components such as stampings and fasteners. One memorable principal was “Ferry Fastener.” Stan mentioned that in the 1940’s during World War II, they were on “allocation” from the U.S. government and could self-determine which customers received the metal parts they produced. It was truly a seller’s market! The War was bad, but business was good.

One of the largest accounts served by the A. L. Whittemore company in the early 1950’s was American Motors Corp. in Kenosha, WI. That single account approached $1,000,000 in sales for the company. During that time, both Phil and Stan drove AMC Ramblers due to pressure from the purchasing staff at AMC and implied loyalty.

By the late 1970’s Phil and Stan were contemplating retirement. K. Edward (Ed) Meissner was the National Sales Manager for Cushman Industries, the predominant lathe chuck manufacturer in the USA at that time.  The A. L. Whittemore Co. was the largest manufacturers’ rep firm for Cushman in the country and was responsible for the Midwest territory. In 1980, Phil and Ed were on their way to Caterpillar, Inc. in Peoria, IL and, out of nowhere, Ed asked Phil about their retirement. One thing led to another, and in March 1981, Ed moved from Connecticut (Cushman’s headquarters) to Chicago with an agreement to buy the company over a one-year period. Both Phil and Stan retired in March of 1982.

See picture below taken at their retirement dinner at the Black Ram Restaurant in Des Plaines, IL. (cir. 1982) 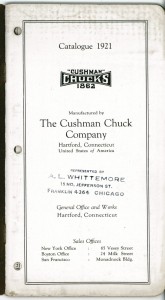 Ed had one outside salesperson and hired Bill Naas who was with Whittemore until 1997. During the early years of Ed’s ownership, product lines expanded. In 1982, Cushman commissions alone accounted for nearly 70% of the business. Cushman was a major factor in the company’s growth from the beginning, in 1918, until they went out of business in 1988.

In addition to Cushman Chuck, Kurt Manufacturing (Minneapolis, MN) eventually became a major line. Added in 1968, Whittemore was the very first independent representative for Kurt in the USA.  Stan was working in Minneapolis and saw an ad for reps in the local newspaper and went there to meet with management (incredible story). They were just starting up the vise business and had a special pull-down feature (AngLock®) to hold the workpiece down during machining. Whittemore was initially authorized only in Illinois and Wisconsin but later worked to expand to our current ten-state territory over the next several years.

The company expanded its offering and, in 1962, added Lisle Corporation (Clarinda, IA), a manufacturer of basic OEM components with a specialty in magnetic drain plugs. Eventually, the company would go on to represent Lisle at the Caterpillar facilities and other large accounts. Lisle was the longest-running relationship with a principal for Whittemore until the relationship ended in 2020 – a total of 58 years.

Other product lines the company added were Suhner Mfg. (Brugg, Switzerland) for both flex shaft and power tools and they became a major product line until they went direct in the U.S. market in l997, WLS stamping (Cleveland, OH), which Whittemore had for almost 40 years and Piper Impact (New Albany, MS) which was also nearly a 40-year relationship. Today, the company no longer represents any of these three companies.

In the summer of 2000, Ed was approached by Dave Zaval who was, at that time, President of Machinery Tooling and Supply Div. Machinery Systems, Inc. (Schaumburg, IL), a distributor of various product lines for Whittemore. Dave asked Ed if he would be interested in selling Whittemore. Nearing retirement, Ed said that he was “ready to talk.” Dave and Ed put an agreement together over the next several months, and Dave joined Whittemore in December of 2000 as a sales engineer. Dave agreed to work as a sales engineer for the first year (learning the rep business and performing due diligence) and eventually take over ownership in December of 2001. When Dave took over, the “official” name of the company changed from “A. L. Whittemore Co.” to simply “The Whittemore  Co.”

When Dave purchased the agency, it was located in a leased office space in Barrington, IL. The drive to the office was about 45 minutes each way for Dave, so he decided to move the company to Bloomingdale, IL, which was much closer to his home. The company operated out of that leased location for 12 years and, in late 2013, Dave purchased an industrial building in Addison, IL, which is the current home of the agency.

Today, the company is growing rapidly and is currently covering a ten-state area in the Upper Midwest with seven outside representatives. We boast some of the best, well-known, principals in industry and have a very strong  technically adept staff which supports our application-based sales strategy.